The Story of the South Garden

The ground next to St. John’s at the corner of Hanford and California is slowly but surely being transformed. It all started in 2009, during the time of The Rev. Peter DeVeau’s ministry, when there was a movement to create a meditation garden there, led by Dylan Mendenhall, a student at UW. A committee was formed, ideas were discussed, Dylan wrote up a site analysis and proposal titled “Restoring a Piece of Creation,” the heavy growth of ivy was removed, and cardboard and newspaper were put down to enrich the soil. Then, the project stalled until early 2015, when The Rev. J.D. Godwin got the ball rolling again. Dylan had moved by then so, with the Vestry’s approval, J.D. commissioned Donna Cooley of Earthly Delight Gardens to draw up a landscape proposal. (She designed, installed, and maintains The Churchyard gardens.) Her design, A Trinity of Gardens, consists of three adjoining circular plots. The middle circle is the largest and will feature a labyrinth. The two outer, smaller circles will have benches for quiet reflection and small gatherings. All three areas will be planted with native trees, shrubs, plants, and herbs to provide seasonal beauty, erosion control, screening from car traffic, and a home for birds. In early 2016, a new group came together, led by Carol Long, and they have made great progress.

The committee quickly realized this would be a multi-phase, multi-year project and that phase one would be building the labyrinth’s retaining wall. We requested the state’s Call before You Dig program to check for any underground utilities. Earthly Delight Gardens was hired to till and prep the site. Karl Pelkan volunteered to engineer the wall construction. Whenever we have worked at the site, people who live in the surrounding neighborhood have stopped by to express how excited they are to see something beautiful emerging.

In 2018, Dan Niven was commissioned to design a labyrinth for the space. As part of that process, Niven taught two Sunday morning classes about the history and spiritual practice of walking labyrinths. A temporary and to-scale tape labyrinth is on the carpet in the Parish Hall so that we may get used to our labyrinth design. 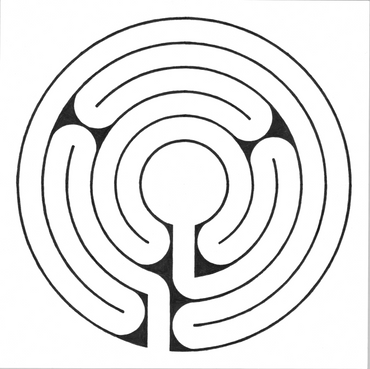 Over the summer of 2018, ten yards of fill were brought in to prepare the site for the labyrinth. Plans are currently underway for the construction of the labyrinth itself before the team moves on to the surrounding gardens.

Since the labyrinth will be a work of public art, it is our great fortune to have Charles Hidalgo-Meyer at the helm. Founder and owner of Hidalgo+Meyer Fabrication Studio, he has knowledge of the ins and outs of public art works, he’s familiar with the variety of materials available and who the suppliers are, and he knows how to construct art works. Plus, his creative mind is constantly percolating with ideas! Whereas most of us look at Donna Cooley’s landscape design and see an outline to follow, Charles sees a springboard for his imagination. He has a wonderful vision of bringing design elements from the church’s interior out into the gardens. One idea is to echo the jewel tones and narrowness of the stained-glass windows by making a simple stained-glass cross to anchor the western circle. Another idea is to create semi-circular enclosures that mimic the vertical lines and openness of the pulpit. These would spiral from a low to high height around both the western and eastern circles to provide a sense of privacy and yet still give visibility.

Check out the Photo Gallery below to see the progress being made in this beautiful corner of our property!